Dance of the Pawn Shop Swindlers

Dance of the Pawn Shop Swindlers

Don't Let their Sleazy Tactics Throw you off Balance 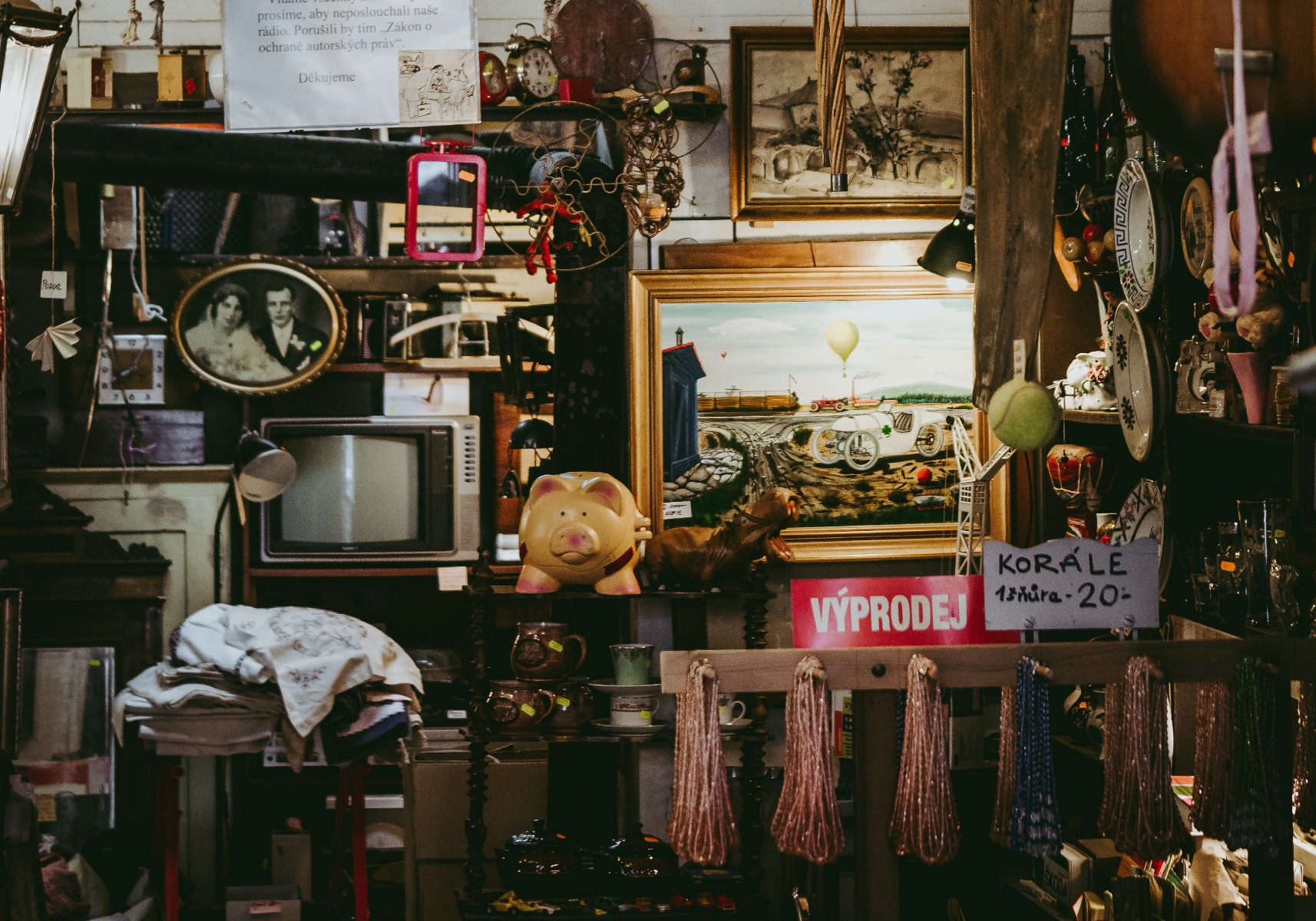 Shopping off the Beaten Path

It's Spring Break and the flowers are in bloom, but there's no flowered scent to the rancid air in the red light district. A matted cat scurries away from a dumpster as I pass, making my way across the littered sidewalk to a dirty little shop with a twitching neon sign, "Pawn Here."

As I approach the cracked glass counter I sense other customers' eyes on me. I don't look like I belong here in designer boots with my sweet little 5-year-old child at my side. My kiddo points timidly at a large rusty knife with a skull engraved in the side and I'm suddenly guilty that I've dragged a kindergartner into such a seedy place.

"I hear you have a violin," I say to the rugged, hunched man behind the counter. I say it in a sweet, treble tone that make me further stand out in a "I'm just a girlie-girl with too much money who knows nothing about violins" sort of way.

Truth be known, I am a violinist and a violin shop owner. I'm not a certified expert in advanced violin authenticity, but I know a good violin when I see one and I also know when to run away screaming when it's junk. I'm here with hopes that the violin in question is worth repairing and restringing so it may be sold cheap to a student on a budget, making me a little bit of cash as well for the trouble.

My hopes are not high that this will happen, but every so often there is something worth picking up. I don't volunteer this information as past experiences have proven this always unreasonably jacks up the price about 400%. I'm not here to gouge the guy, but I don't want to be gouged myself.

I never talk people down; it's not my way of doing business. I will pay if I like the asking price, if not I just walk away. With these guys I act like I know nothing and I can usually get it at an appropriate price. I will have to dance the dance to keep this transaction fair.

The man behind the corner clears his throat loudly and eyes me suspiciously. I blink twice and smile, pink lip gloss shimmering in his clouded eyes. He glares again, slowly turns then limps to a back room, shouting over his shoulder something about how he has to go to the "special room" where rare instruments are kept. 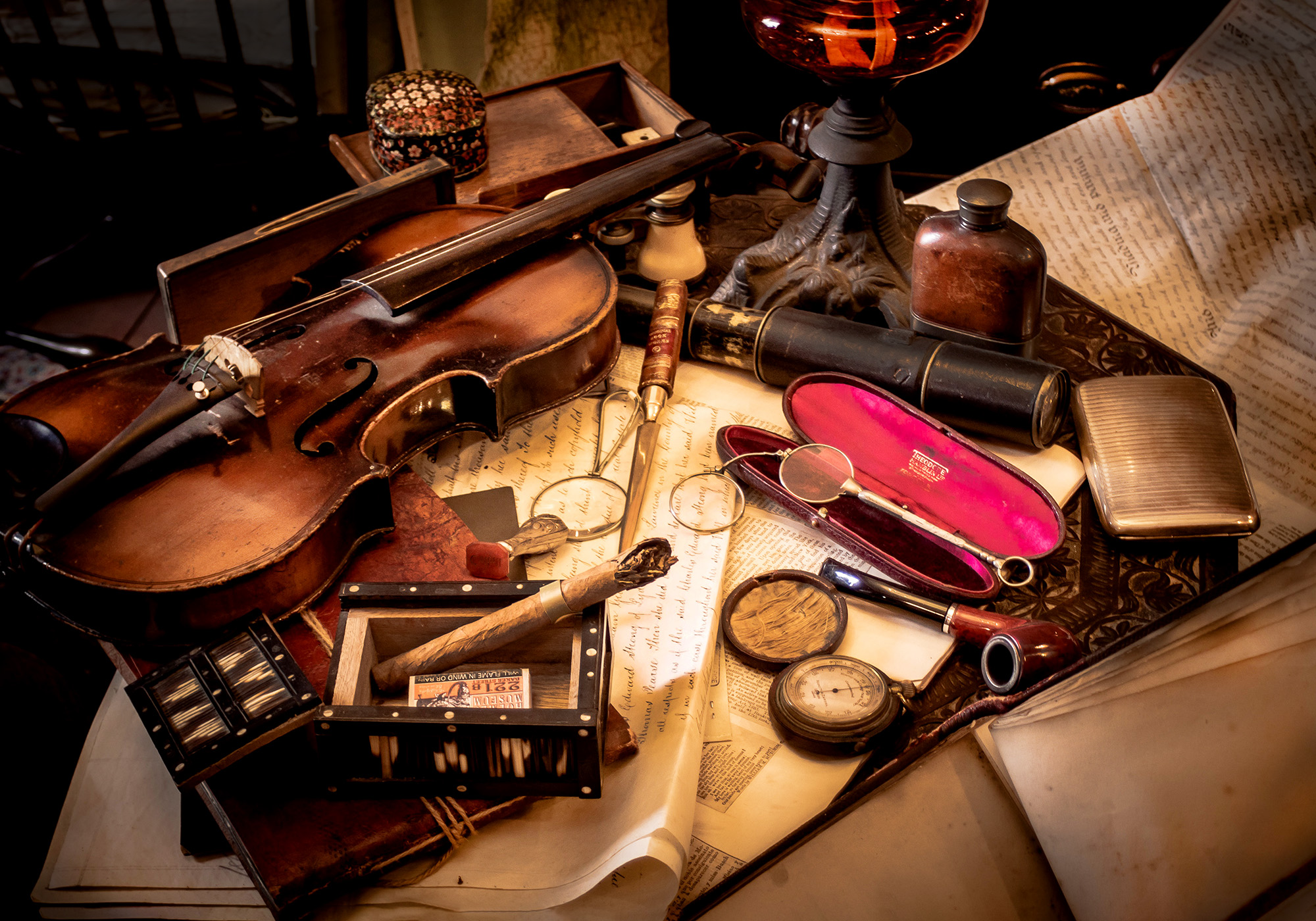 This is pawn shop Tactic #1: Talk up the merchandise and add unrealistic mystique.

He returns with what looks like a miniature coffin covered in dust. It's an old black wooden violin case. Predating plastic and styrofoam, these were the sorry excuses for cases that caused more harm to instruments than not since they had no padding and the weak metal latches that held them together would spontaneously unhinge, causing many a fiddle to fall to death during transport.

"This is a fine antique case, made in 1883," says the shopkeeper. A man to my left approaches and says breathily, "those things are worth $500! They are very rare!" I keep my neutral gaze and say, "Oh yeah."

First off, I have about 4 such cases stored under my bed since I can't get rid of the things. Secondly, I had seen this "customer" helping move stock as I passed the shop a few days earlier. He was another employee who poses as customer to add "unbiased" credibility to the lies the shopkeeper spins.

My daughter coughs and looks around, bored out of her mind. I maintain my blank expression. I'm starting to think the violin inside this casket is a dead end.

The shopkeeper opens the case and my suspicions are confirmed.

It is absolutely horrible. A cheap, Chinese made Corelli or Bestler or Lark fiddle from the early 1980's. I've seen so many to know what they are upon first glance. It has the usual ugly starburst orange and yellow plastic finish, which has cracked and crackled due to heat exposure. The pegs are made from cheap, splintered rosewood painted black. The chinrest and tailpiece are the cheapest shiny black plastic, with a sticky mystery stain covering the cup of the chinrest.

As if this kind violin wasn't wretched enough in playable shape, the junk before me had been crushed and nastily glued back together. Sort of. The neck was askew and the top was coming undone at one side. I can safely say this was the most deplorable violin I have ever seen, and I've seen a lot of rotten junk in my time.

I forcefully hold in judgement like a bulimic keeps from getting sick with company present. The shopkeeper inhales, about to launch into his spiel, using pawn shop Tactic #2. 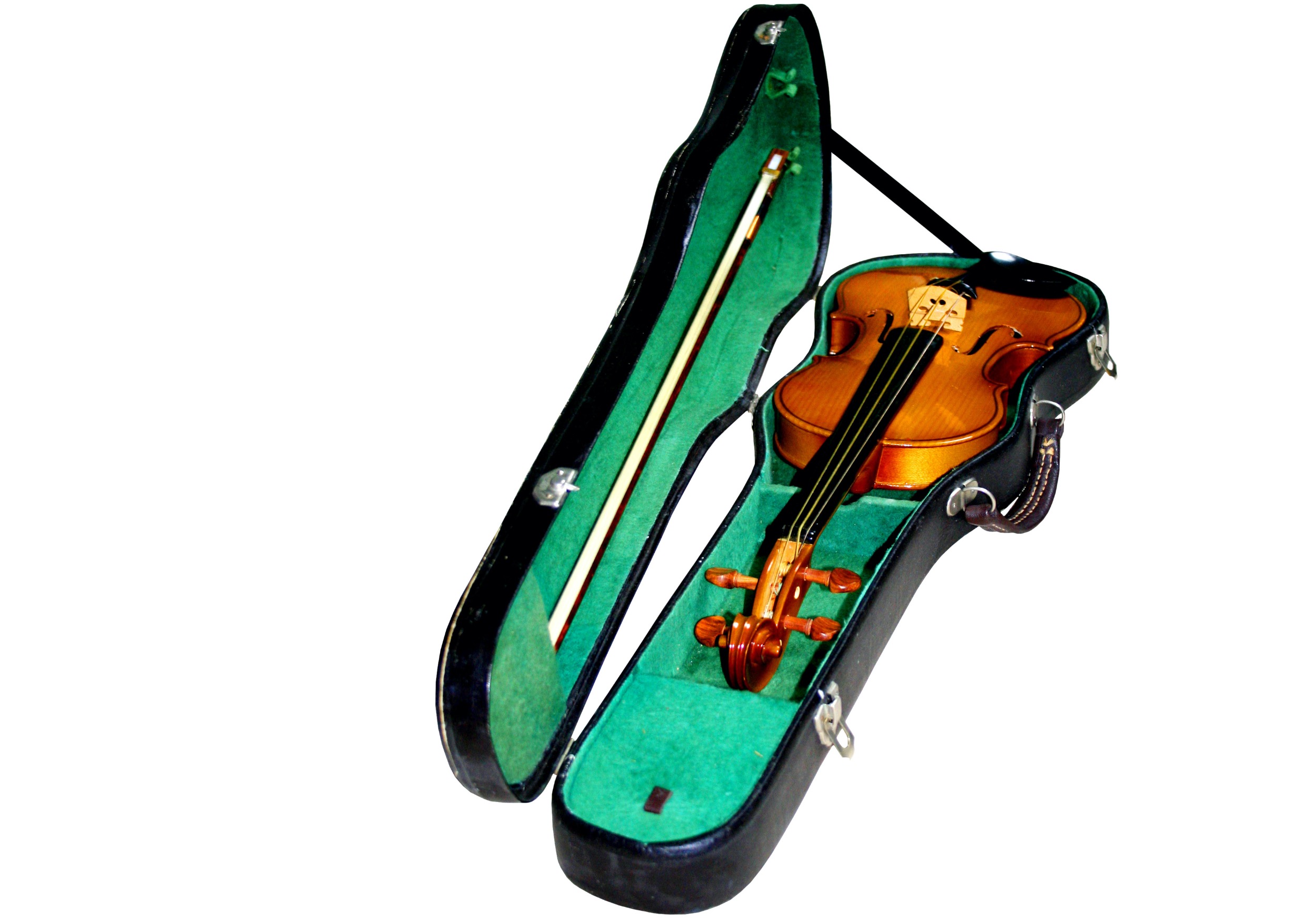 "This here violin is a master instrument," he says in a hushed tone. At this I am compelled to say something or I'll burst. "It's a Chinese Strad-copy violin from the 1980's, most-likely a Sky Lark," I interrupt quickly. 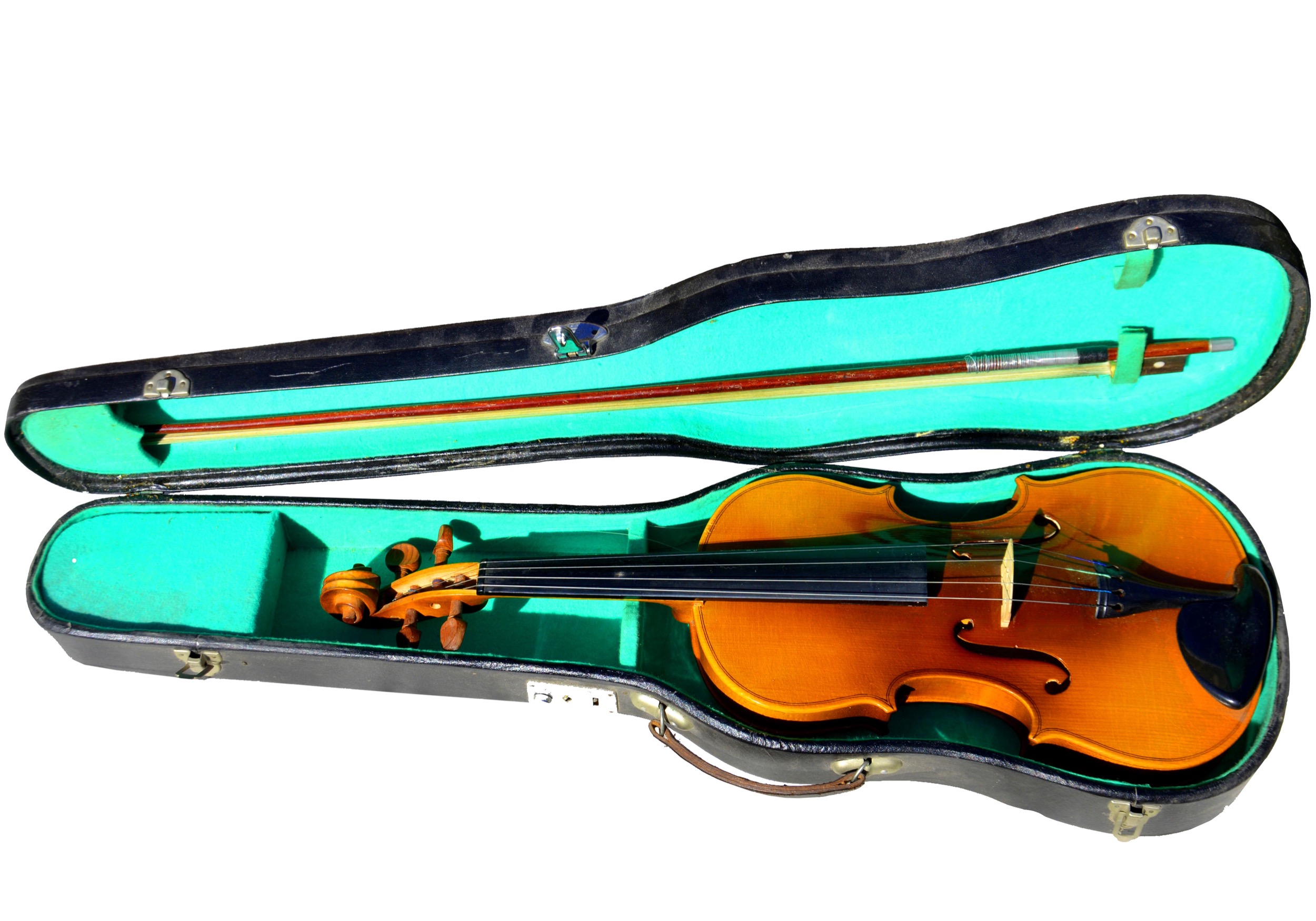 But wait, he tries pawn shop Tactic #3: Lie some more.

"No, M'am," he simpers. "This is a real Stradivarius. It's been in an attic for a long time, an undiscovered treasure." His face has obviously rehearsed the honest, pleading expression. His knack for lying is, in a sick way, admirable.

This is beginning to annoy me, but I want to see how big of a hole he'll dig for himself. I look at him as if wanting to be enlightened.

He takes the bait and goes for tactic #4: Lie, but make it a real whopper.

I'm nonplussed. I blink and don't say a word. He begins to backpeddle.

"I'll tell you a secret," he says as he leans over the counter toward me, as if he was about to spill the beans on Area 51 and didn't want the government bugs to pick up his urgent whisper. "This violin was made by one of Stradivarius' students," he lies. "Studied with the master, was like family to him. And it's even MORE valuable than any other violin as it came from a secret maker."

I almost laugh out loud at this, considering "Stradivari," not "Stradivarius," was the maker of Stradivarius violins and nealy all of his instruments have been accounted for. They don't look ANYTHING like this hunk of junk. His apprentices would not have used his label. And really, what kind of idiot thinks the most recently discovered Strad is for sale at a lousy pawn shop? If it's SO valuable, why doesn't he accompany it to auction in Euope and leave in his own private jet with the earnings?

I mentally applaud his creative acrobatics, but am disappointed he didn't incorporate the Titanic or moon landing in his musings. Confession via the "made by a student" angle was crafty as the admission would seemingly promote trust. I simply found it tedious and boring.

My daughter is shuffling her feet, but not complaining aloud. Such is the conditioning of the child of a violin-obsessed mama. I actually wish she'd throw a tantrum so I'll have an excuse to leave quickly and without increased pressure from the seller to stay. Instead I maintain my composure and casually thank the fellow for his time before I turn and leave, ignoring his hapless attempt to convince me to take a closer look. I gently cut him off and thank him again. He keeps his cool as my daughter and I push the door open and walk out without another glance back, though to him I'm "the one that got away."

We danced the delicate dance of buyer and seller, player and swindler, and thankfully no one's toes were stepped on. He will go on to swindle another and may do well in the end. I am confident that people are good and I don't take it personally when they make bad choices.

As we drive away, my daughter asks why I didn't buy the nice violin. She has the precious childhood gift of trust that will sadly be whittled away by life's encounters. In this time and place it is a pure thing I don't want to trample in this teachable moment. I explain that sometimes some people don't tell the truth and we need to be cautious of believing their stories, and to learn facts so we can be safe. I tell her it is my job to learn about violins so that they know how to find a good violin that doesn't have made-up stories.

Thus I am teaching her a lesson on footwork in life's tricky dance moves: keeping your balance while still enjoying the music. 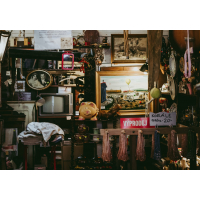 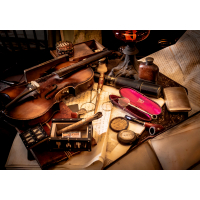 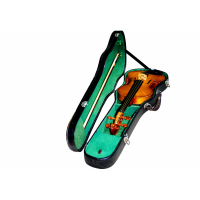 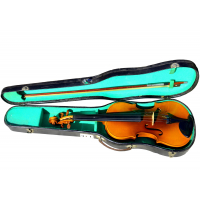